Spoiler alert: I’m writing this as I sit at Schlotzky’s after eating a chicken pesto sandwich. Really, Schlotzky’s has made it all the way to a mall in Turkey!

I’m not sure why, but for the first couple of weeks that I was in Turkey, I only ate Turkish food. Then this week I had a total relapse and ate almost every other type of world food available here. When I’m in the states, I eat all kinds of food all the time. If I had to pick, I’d say more often than anything else I eat Mexican and sushi, although in DC I was pretty wild for Korean-Mexican fusion. Seoul Mama was my absolute favorite food truck!

But back to Turkey. The food is super! And the word super works in both languages, although in Turkey it’s best to pronounce all Western words with a French-sounding accent. I love saying Sou-pere and making the word last as long as possible. Since I don’t actually speak French, I sometimes feel like a double-ax Turkish murderer, but it’s fun.

For lunch I generally find a little Turkish place offering a menu, which is usually 10-15 lira, or 5-8 dollars. For this, you usually get a soup, salad, main course served with rice and some kind of fruit dessert. They also load the table with bread which is really tasty as well. Here are a couple of examples: 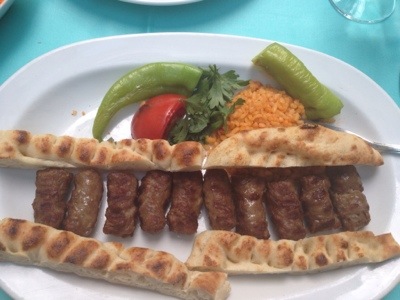 This is all great stuff. I’m not sure why I felt I had to binge Turkish food though.

In this week of rebellion, I’ve picked my coffee up at Starbucks on the walk to school almost every morning. The school’s cafeteria sells Nescafé, which gets old really fast. And as much as I love all the Turkish cafes here, they haven’t mastered the idea of convenience food yet. So if you want to stop in and get something to go, your best option is Starbucks! I also found a great steakhouse, günaydın , which means good morning in Turkish. Weird name, but it doesn’t affect the food quality! In the same neighborhood, which also happens to be where I’m moving, is an award-winning Italian restaurant, Mezzaluna, which I’ve only been to once so far, but it was good. Last night, I had quesadillas. In the Arab world, the Mexican food always had a faint curry taste, I think because even at institutions like Casa Mexicana in Manama, Bahrain, the cooks were Indian or Pakistani. Here, the sauce was normal, but the sour cream was more like light yoghurt – really weird. I think I’ll be okay – the food is far from spicy, so I guess the sour cream isn’t really necessary.

That’s it for now – I’m off to an Internations party, where I’m sure the food will come from all over!