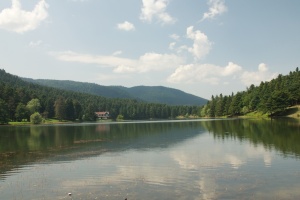 On our way up to the Black Sea this weekend, we had a great stopover at Gölcük, an area with a beautiful mountain lake and hot springs. After two and a half hours on a bus, a brisk walk around the lake was welcome exercise. Actually, the area was so beautiful that I wanted to just stay there for the weekend. There are plenty of thermal springs hotels in the area, so I may be back. 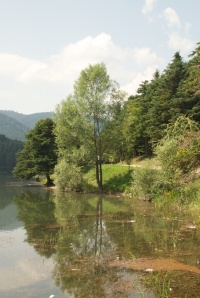 As we walked around the lake, we kept spotting watermelons, as if we were in some surreal Easter Egg Hunt. Finally I realized that the watermelons were all directly under or in cool springs – the picnicking families were using the springs to cool their desserts!

The house you see in this picture is a retreat for ministry workers, kind of like Camp David. 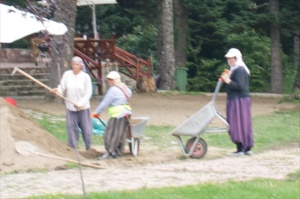 I included this picture, even though it’s fuzzy, because it was a harbinger of one of the oddities of the Black Sea Region. While these woman worked, the men sat and had coffee, smoked cigarettes, and played backgammon. As we closed the Black Sea, these gender roles became more and more apparent.