I’m thankful for the opportunity to live in Turkey for a couple of years, and to share this amazing experience with you!

Devil Towers or Fairy Chimneys: A weekend in Cappadocia

Last weekend I took some friends to visit Cappadocia, which is unlike anywhere else I’ve visited on Earth, and sometimes so surreal that I felt like we had stumbled onto another planet.   It’s currently known as the home of fairy chimneys, but before the Turkish Tourist Board came up with that pleasant moniker, they were called devil towers.  I’m not sure how long that name was around, because the area is one of the oldest Christian settlement areas, and people from various historic areas have called those chimneys and towers home.

The drive from Ankara was less than scenic because of intense fog, but my San Diegan friends and I were tripping on the fall colors we could see, old-school CDs and the intense feeling of freedom you always get from a road trip.  My Turkish TomTom was really determined that we would see the “scenic” route, and sometimes put us on roads that abruptly ended or transformed from pavement to steep rocky creek beds in the space of a meter.   My car is neither practical nor rugged, so we made a lot of U-turns and multi-point turns.  We learned our lesson: we are smarter than the machines! Still, we relied on the GPS to get us around the region with mixed success.  I’m still trying to find a decent map of the 50 square mile area, since we couldn’t find all of the various valleys and formations to hike that I read about.  Unfortunately most of the tourist shops offered the same book that is full of pictures but little actual information.  It’s not really a problem, however, as the landscape is so incredible that whether you’re lost or found there’s always something to see.

Eroding volcanic formations from 2 million to 65 million years ago have created all kinds of spectacular rock formations.  Going through the area is like watching clouds – everybody sees something different, and sharing your view never gets old.

In late November Cappadocia is significantly colder than Ankara or Istanbul.   For those of us deprived of seasons for the last several years, anything out of the ordinary is welcome, and I was happy to be out in the chill air.  It was also perfect for eating my favorite type of Turkish food: stew made with lamb meat and various fruits, from plums to apricots to pomegranates.

The fog was a blessing in disguise as well.  The most popular tourist activity in the region is hot air ballooning, and since all the sunrise rides were fogged out, we got to see plenty of launches and balloons in flight when we arrived in the afternoon.  I’ve been ballooning in San Diego and wasn’t terribly impressed, but I think that Cappadocia is probably the best place in the world to do it, since you can see the topside of all these stunning views.

Like most of Turkey, Cappadocia has hosted countless civilizations, starting with the Hittites, the earliest known people in Anatolia.  They started the cave dwelling and carving homes from the rocks.  In Kaymakli, we toured a 5 story cave city that was used by Hittites to hide from Assyrian and Phrygian attacks, by early Christians to hide from Romans, and finally by Romans to escape Persian attacks.   Most of the underground city crumbled in earthquakes over the centuries, but we were able to see several living rooms, kitchens, pantries and churches.  More memorable than the city structure itself was the cramped feeling of walking and crawling through the cave tunnels and stairways while imagining life inside, before lighting and modern ventilation.  Although there are several air shafts, during periods of hiding most were cut off to prevent enemies from poisoning the air or trying to contaminate the water sources.  It’s not clear whether there was a natural spring inside the dwelling, but it’s likely considering how there are natural springs pretty much everywhere you go in Turkey.   Seeing the corners where chamberpots were kept while contemplating little fresh air contributed to the discomfort.  Still, what remains in the city is really interesting: hooks carved from the rock to tie baby hammocks, churches with crosses and frescoes still on the walls, huge round stones used as doors to block off sections of the cave, and a huge stone with tons of little carved pockets used for spice storage.

On our last morning in the Valley, we visited the Goreme Open Air Museum, which is what remains of a Christian monastery with rock-cut churches, mostly from the 10th-12th centuries.  The churches are in remarkable shape, and for the most part the frescoes inside are well preserved.  In a few of the churches the faces on lower walls have been scratched out, but it looks to be the work of amateurs or kids, since the ceiling frescoes are still untouched.  I never figured out whey there were so many churches in the same tiny place, especially since some were decorated with the same stories or themes.  I guess you can think of it as a bunch of chapels, and the whole area as a huge church.

We stayed in a cave hotel in Urgup.  The cave room was really pleasant, despite the absence of a window.  It’s incredibly economical, as the innkeeper runs a woodstove for a few hours in the morning and the thick walls keep the rooms cozy.    One morning at breakfast he showed us a picture from the 50s of the view from the balcony, which we compared to the current landscape.  Over the years, entire parts of the rock had just crumbled away!  I sadly realized this would happen when we were hiking on our first day in the valley and whatever I touched crumbled slightly.   If you want to see this amazing place, come soon!

A Year in Green!

For this week’s WordPress photo challenge, I went through all of my 2012 looking for strong greens.  Seeing where I found that color throughout the year is a great look back. 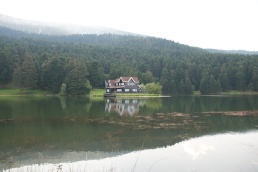 growth at an abandoned convent, The Algarve, Portugal 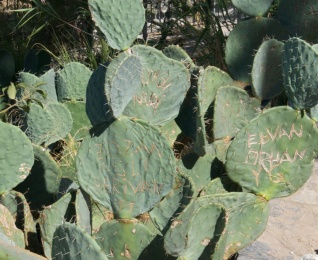 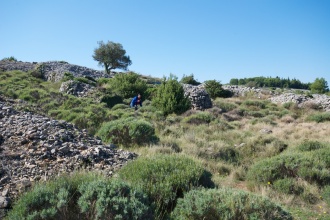 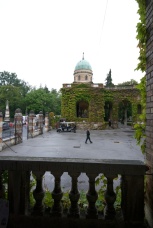 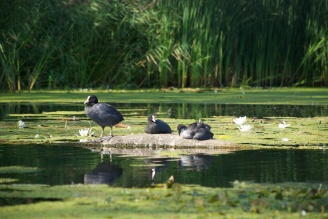 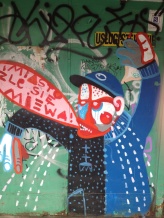 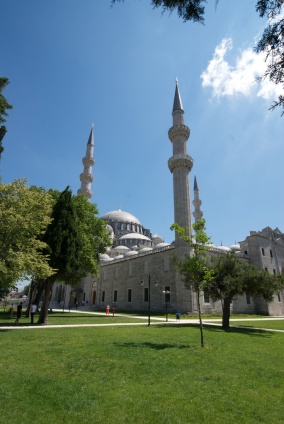 the Bosporus over the trees, Istanbul, Turkey 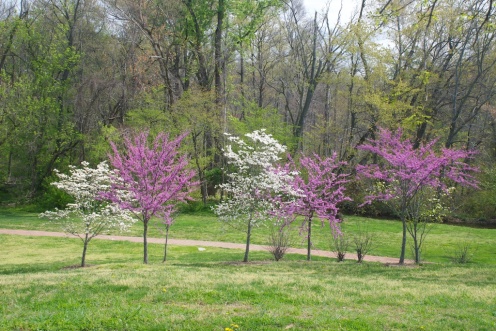 When visiting another English-speaking country, I love to listen to the differences in dialect  between American English and the local speakers.

An ad for Skyfall, with a London cab and the Waterloo station in the background

A few weeks ago when visiting friends in the UK I practically learned a new vocabulary.

Pikey: the slacker kids who hang out in the park across the street 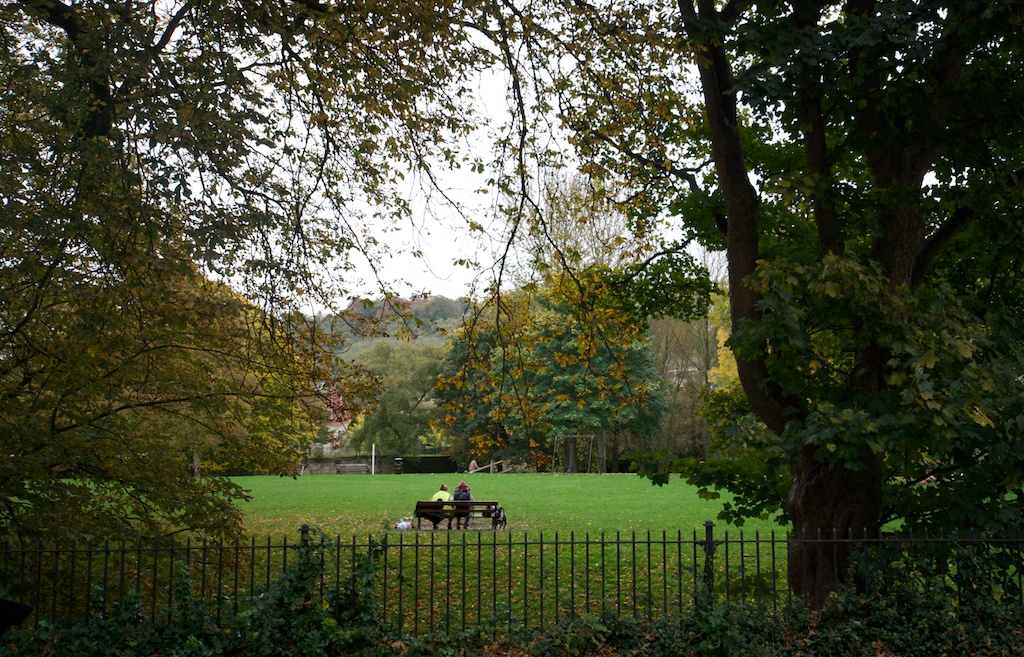 Curry: apparently, this means Indian food in general.  I always thought it only referred to actual curries.  But when your friends say, let’s get curry, they mean let’s order a whole lot of Indian food.

ha ha: the line on the park green that marks the separation between the area for commoners and landowners.  I think my friend might be pulling my leg on this one, but there it is in the picture.

You can see how the bride and groom are staying on the common side of the line.

Scrum, Grubber, Hooker, and Ruck: terms used at the rugby game.  I learned how to be a spectator and cheered for the right team most of the time, I think.

Nappy and Dummy: a diaper and pacifier, respectively.

Creme tea: this is a snack including a tea or coffee, a scone, and a huge dollop of clotted cream.

Whoopi Goldberg: how to order tea with no milk and sugar.

Julie Andrews: how to order tea with milk but sans sugar.

Brilliant: awesome, good, amazing, pretty much any positive superlative you want to add.  Or a negative one, if you’re feeling ironic.  It works for everything, and describes the great long weekend I had visiting London and Bath.

This morning as I waited in the Immigration line, I relearned, for the umpteenth time, an essential lesson for living in Turkey: leave no space. For whatever reason, Turks have a natural repulsion to order. You won’t find them neatly standing in a line. Instead, where there’s an obvious checkpoint, they will rush it and every man will subtly push to the front.
As a strong proponent of social obedience in the areas of traffic and queuing, I take secret pleasure when a system is in place to force Turks into a proper queue. Usually this is done by forming queues where only 1 person can comfortably stand across, and usually occurs at more modern places, like western hotels and airports.
Even though Ankara’s airport is a pretty small, not-busy airport, everybody is still in a rush. Wile waiting to pass through immigration today I was behind a guy with a nervous tick and a weird roller bag that kept hitting my feet every time he shuffled his feet. So, the next time the line shuffled forward, I left a little space between the bag and me to protect my feet. The guy behind me saw the open space and slipped right ahead of me, which of course involved actually jostling me – way beyond a violation of my personal space (a concept non-existent in Turkey, by the way). Since we probably had about two more minutes to wait and plenty of time to make the flight, I didn’t really care. Obviously, I thought, this guy is in a big hurry, and I had my iTunes and headphones to keep me entertained while waiting for another person to get through.
But then I felt like somebody was rubbing up against me, again. I half-turned, and realized that the line-cutter’s wife now also felt entitled to cut too, because she should be with her husband in line. For some reason, the best Turkish rolls off my tongue when I’m fighting queue-cheats – maybe I should spend more time queuing. So, I confronted this lady in Turkish. She acted incredibly offended that I would dare to challenge her line-cutting. It’s just one more person – what’s my problem? But I held my ground, and eventually her husband (properly shamed) joined her, behind me, in their rightful place in the queue.
I had the last laugh while answering the Immigration Officer’s questions about my unique “soldier residence status” and life in the American Navy as long-windedly as possible. I’ve never shared so many sea stories at the border before and don’t regret a minute of it. After all, I need to practice my Turkish every chance I get. I should be thanking those line-cutters for giving me an extra chance today!