Istanbul Is Always a Good Idea

In the movie Sabrina, Audrey Hepburn said “Paris is always a good idea.”  That’s exactly how I feel about Istanbul.  I think Istanbul is Turkey’s Paris anyway.  With a population of around 13 million, it’s bigger than half the countries in the world, and has all the museums and neat shops that you’d expect with the kind of specialization that this population supports.  Luckily for me, it’s also just an hour’s flight from Ankara.

Mosques are everywhere – this is the Nusretiye Cami, seen from the Istanbul Modern’s parking lot.

Last week I took a quick hop to Istanbul to meet up with various friends.  It’s the first time I went to Istanbul and stayed alone, and due to the recent murder of a Staten Island women solo traveler, I couldn’t stop thinking about how a situation could go bad, and constantly considered my exit strategies (this is the first of many navy terms in this post – I hope it doesn’t confuse anybody).   The victim was Sarai Sierra, and if you don’t already know the story you can read more about it here: http://www.nytimes.com/2013/02/08/nyregion/sarai-sierras-body-is-returned-from-turkey-but-mystery-remains.html?smid=pl-share

I was slightly more aware of my surroundings because her travel habits are similar to mine: renting flats, meeting with locals, taking photography walks, etc.

Combined with the bombing of the Embassy in Ankara, it wasn’t a great week for Americans in Turkey.  Many Turkish friends reached out to express their sorrow about what happened.  Some, especially those involved in tourism, worried about how this would affect their best customers’ plans to travel in Turkey this summer.  Every Turk I met with told me to be careful, especially since my name was so similar to hers – they considered it to be bad luck.  I’m usually pretty careful when travelling, especially alone, and pay extra attention to my intuition, or what the Navy calls spidey sense or your reptile brain.

When walking back to my flat after meeting some friends off Istiklal Street, I was approached a few times by Turkish guys, also alone, who wanted to practice their English with me, or at least used that as their opening line.  I spoke to them only in Turkish, and eventually they all gave up.  I also only walked on crowded streets, even though it wasn’t the quickest way, so that I could scream for help if necessary.  Thankfully nothing happened, but I still felt uneasy until I locked the door to my flat.  So, lesson learned: next time, I’ll get my friends to accompany me back.  I also probably won’t stay so close to such a crazy nightlife area next time.

Since I was on my own for parts of the day, however, I took advantage of the time to slowly peruse some sites I had missed on previous trips: the Chora Church and Istanbul Modern.  The Chora Church is located in a pretty conservative neighborhood off Istanbul’s tourist track, so visiting is harder and takes a little more time.  I had planned on walking to the edge of the Golden Horn, one of the waterways that splits up the city, and then taking a ferry along the coast.  However, it was raining all day, and on my way down the street I slipped and totally wiped out, so in frustration I grabbed the nearest cab, which was about a fifteen minute drive and a great chance to practice my Turkish.

I almost forgot to get a picture of the outside of the church. Here is it from where my friend’s parked their car.

The Chora Church is considered to be the best surviving example of a Byzantine church and to have the most beautiful art, and I agree – the frescoes and mosaics here are simply breathtaking!  I had a cute black cat as my guide, so while playing with him I took my time taking in the art.  You need frequent breaks to relax your neck as the most impressive mosaics are on the ceiling.  Unique from other churches, this one highlights the birth and life of Mary in a series of incredible mosaics.

The church was originally built in the 5th century, and then due to earthquakes and other damage, it was rebuilt as it currently stands in the 11th century.  After Constantinople fell to the Ottomans, it was converted to a mosque and all the frescoes and mosaics were covered with plaster.  It was restored as a church and became a museum in the 1950s with help from Dumbarton Oaks.  I mention Dumbarton for my DC area readers – you can visit the house museum, which focuses partly on Byzantine art, in Georgetown. 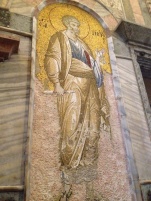 This is one of the few mosaics at eye level – I wanted to show how amazing the tilework is.

the whole scene in the entrance chapel

the End of Days fresco. If you look below Jesus’s feet, you can see all the locks that were broken as he rose into heaven. 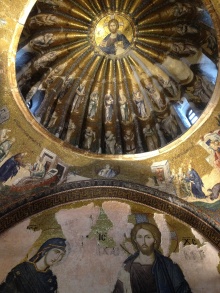 After visiting the church, I met the Istanbul Olmsted scholar and his family for lunch at Asitane, a restaurant we all wanted to try.  This was the best meal of the trip!  The restaurant focuses on Ottoman cuisine from the 16th century.  I had a chestnut terrine soup and a lamb stew with apricots, almonds, and prunes – all wonderful!  My friend got stuffed quince, which I think was probably the best of the options.  If you’re going to visit the Chora Church, definitely plan on a meal at this restaurant.

The Istanbul Modern is the city’s modern art museum.  It’s built right on the Bosphorous, and if you get tired of looking at the art, there are plenty of spaces with windows and balconies where you can watch the ships go by, an activity that I find endlessly fascinating.  The cafe also has a window-wall and balcony with an amazing view of the strait and city.  Currently the exhibits in the museum focus on Turkish artists, so it was a real learning opportunity for me.  Most interesting was the “New Works, New Horizons” Exhibit, which highlights the development of contemporary art in Turkey from the early 20th century. It was a refreshing change from the international collections that I’m used to seeing at the world’s modern art museums.

On my last night I met up with an old division officer from the USS Gary (FFG 51).  He broke from his hostel buddies to do the foodie thing, so we met at the Pera Palace Hotel for a tasting dinner at Agatha.  Apparently Agatha Christie wrote parts of Murder on the Orient Express while staying at this hotel!  Now I guess I’ll read the book.   The hotel is very grand and had several clubby type bars and tea lounges.  The restaurant Agatha is a more modern undertaking and located in the basement.  Although all the food was good, none of it was remarkable – the best part of the meal was the company, of course, followed by the wine – five courses of Turkish offerings, all of which were great.