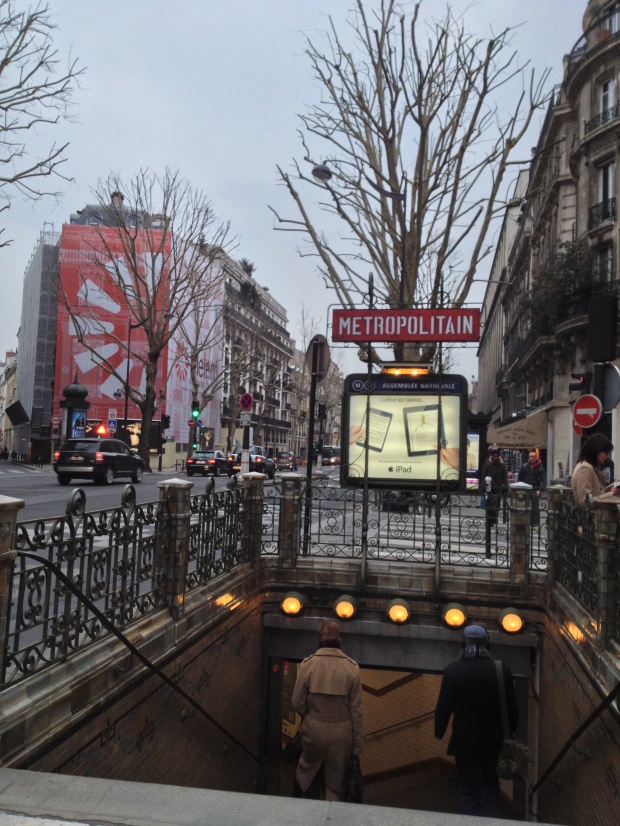 Somehow I fell off the blogwagon, and now I’m three trips behind! So today I’m going to finish up with the Paris trip, mostly by sharing pictures.  For those who are concerned, I have not become a francophile.  If you saw my perfectly fluent French-speaking friend Axel’s face in response to my French pronunciation attempts, you’d agree.

I know this is hard to see, but these are huge chocolate fish!

a shop on Rue Cler 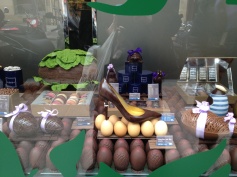 masks and eggs for Easter

Laurie and I did a foodie tour of Paris, with trips to the Grand Marche Epicerie, the most amazing chocolate shops I’ve ever seen, and a few macaron bakeries (my favorite).  You can even take a class to learn how to perfect your own cookies, but I didn’t book soon enough on a busy Spring Break week.  Another morning we did the weekly shopping on Rue Cler, where Julia Child used to shop for her produce!  As I’ve mentioned, everything in Paris is so pretty, and the fruit and vegetables are no exception.  Even on Monday, when a lot of the shops where closed, I caught whiffs of various fruits and vegetables as we walked down the street.

The Pompidou Centre, an “eyesore” to the classic Parisian 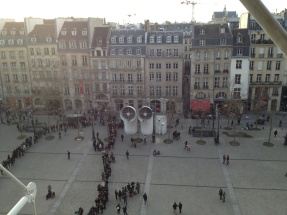 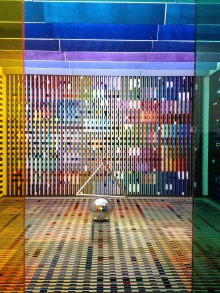 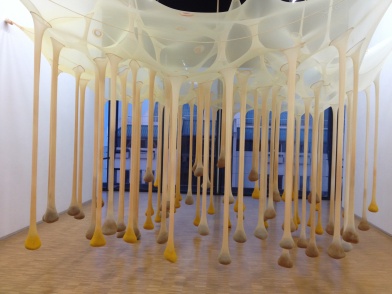 weird looking but it smells great

One afternoon I decided to check out the Dali Retrospective at the Centre Georges Pompidou.  I’m obviously no Parisian, as I really enjoyed the modern building and its odd features.  I had a lot of time to check them out, as it was the last day of the exhibit and I probably stood in line for three hours or so to get to the galleries.  Luckily there was a group of easy on the eye Viking-like guys ahead of me, so I wasn’t too bored.  We were frequently passed by classes of schoolkids with little sketchbooks, which seemed very French to me, since Dali’s work is definitely risque.  I can’t picture a group of American eight-year-olds plopped down in front of the Masturbator while their teacher highlights its complexities.  Unfortunately, even with the long wait, when we finally did get into the show every gallery was packed and fighting the crowds lessened my enjoyment.  Still, I hadn’t seen that many works of Dali in one place ever, and the whole experience was worth the trouble.  Although I think he’s a great artist, what I really admire is his spunk and imagination, both of which seem to come through in all of his works.

We Stopped Here Just at Time by Ernest Leto: weird looking but it smells great

Since the Pompidou Center is full of modern art, I spent a little time checking out the other works.  I have low museum tolerance these days, so in lieu of checking out every room I just wandered the main halls and checked out galleries where something caught my eye.  The most interesting was a work by Ernest Leto, and instead of just looking it was an experience of smell and a pleasant surprise after so many hours of just looking.  Each of those fabric legs is full of spices, like cinnamon, cloves, and pepper.  I think it looks like a spice merchant ran out of containers and started using his wife’s stockings to keep the goods.  Because it’s such a departure from what you expect at a modern art museum I think it was my favorite thing there.

Another afternoon I walked through some of the hidden passageways in Paris.  These are beautiful shopping arcades full of tiny super-specialized shops selling everything from stamps to old postcards to dollhouse lighting supplies.  As with most things in Paris, each shop was absolutely beautiful.  I briefly considered becoming a philatelist and started looking for stamps and postcards from the Ottoman times.  As soon as I started asking prices I jumped off that idea – some of those stamps would wipe out my entire travel budget!

Finally, I just walked around the city.  Even on a cold foggy day, the Tuileries are beautiful, as are the rest of the streets in the inner arrondissements.  Here’s a sampling of what I saw on the streets:

at the entrance to the Musee de Orsay 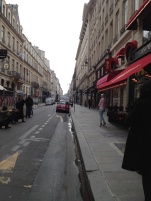 we walked right through a fashion shoot!

I had to say hi to the kebab guy and practice a little Turkish!

It was so hard to leave Paris and go back to Ankara for class, especially after sharing such great days with my hosts,  Laurie, Axel and their kids.   On my way out I had one more favorite site: the people movers at Charles De Gualle!  I hope I can find time to make it back to Paris during my Olmsted tour – it’s such an amazing city.