I’m a little behind on blogging our road trip – actually, I’m just starting right now with Day 1: Ankara, Turkey to Thessaloniki, Greece.  I also decided to skip the last couple of weeks in Ankara – I’ll catch them on the flip side, maybe some time this fall.

My friend Kim and I wanted to see the Balkans and originally planned to drive up through Bulgaria and make a loop from east to west, going as far north as Hungary.  Of course our plans were a little ambitious to start, and we cut out several stops and then reversed the entire direction of the trip when one of our free lodging sites had a schedule change.  So instead, we’re heading west to east, and the last stop before returning to Turkey will be Bulgaria.  I think the only casualty of this plan is the weather.  We’ve been suffering through rain and cloudy white skies through most of Croatia.

Google maps and the gps predicted a 10 hour drive from Ankara to Thessaloniki, and we think we did it in 12 – we had some leisurely stops for lunch and dinner.  The drive itself was pretty easy – mostly highways with clear directions and the gps telling us which lane to get in when the route became confusing.  Actually, the most confusing part was the border checkpoint, where Turkey has a huge set-up with all kinds of buildings where you have to stop, and then Greece has several soldier checkpoints that tell you to keep driving, keep driving, until eventually somebody looked at our passports.   We were pretty exhausted by Greece and decided to get dinner in Alexandropoulis, where my love of Greek food was reaffirmed.  I had been dreaming of lots of salad and warm country bread all day, and that’s exactly what we got at a beautiful seaside cafe with a warm owner.

In Thessaloniki, we stayed in Ladadika, the old warehouse section of town that’s been transformed into a nightlife hub.  Our hotel was super-cheap and included breakfast and lots of free wine – can’t go wrong there!  Of course, our room looked like a bordello and parts of it smelled like cat food, but it worked for us! 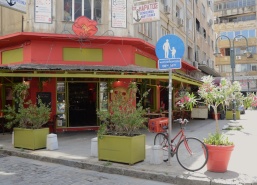 the cafe across the street 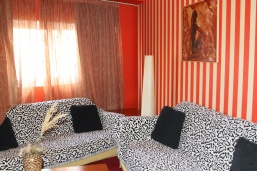 does this room look trashy to you?

Thessaloniki is a beautiful city with a real cafe culture.  If you’re ever tired, thirsty, or just lazy, you won’t go far before you find a place to sit down and relax while people bring you drinks.  If you’re hungry, on the other hand, you might have to walk forever, as we did, to find a cafe serving more than just toast to accompany the coffee.  After touring some ruins, we finally found a place where people were eating real food!  We ordered by pointing at the other table with food and saying I wanted this and that – I thought I had gotten us a salad, some bread, and a few kofte, but the food just kept coming out!  It was all amazing, except, at least according to Kim, way too salty.  For me, that’s where all the flavor is!  Also, sorry to all my friends from other olive-producing places, but Greek olive is pretty amazing!

Unfortunately the path from our neighborhood to the main cafe district was infested with these Jamaican guys – I finally learned to say that I only speak Finnish, which very few street people can match (definitely don’t go with English, German, or French).  I’m still not sure if they were selling something or just really advanced at panhandling.  Basically, they’d come up, offer a free friendship bracelet and tie it on in about two seconds.  Step 2, flattery: they’d tell you how beautiful you are, and how they hope to meet somebody half as gorgeous very soon.  Then the pitch – to donate money for their music.  They had some fliers about a Jamaican party boat that they waved around but never really mentioned.  Our first guy wouldn’t take no for an answer, and kept asking for money from the goodness of our hearts.  Apparently our hearts are pretty hard, because when we finally convinced him that we weren’t giving him any $$$, he cut off our bracelets.  Oh well – Kim didn’t even like hers!  Of course, they could strategize a little better – Kim and I still had yet to get to an ATM or get pocket coins, so we actually had no money to give even if we had wanted to. 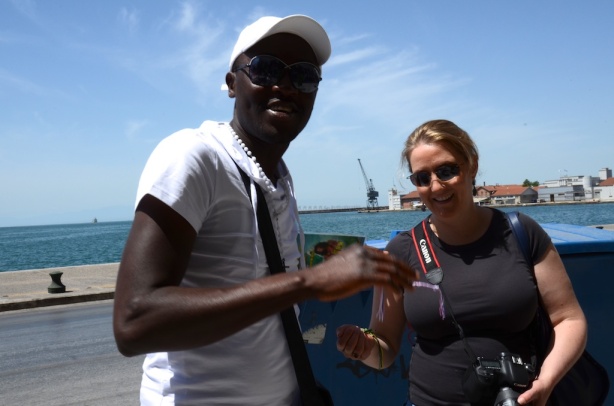 I’m one of those people who loves graffiti, and Greece definitely has some good stuff.  Here’s a few of my favorites from around Thessaloniki: 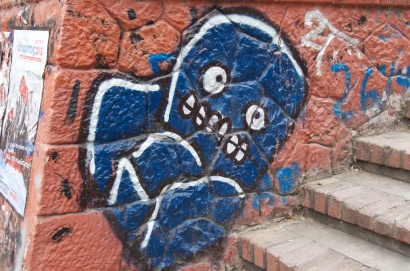 Before you think that all we did in Thessaloniki was sit at cafes, drink coffee and wander off in search of food, don’t worry – we did stumble on some city ruins from the various civilizations that have occupied the city.  Like many other cities in this part of the world, most of the civilizations we studied in sixth grade ruled Thessaloniki at one time or another.  It started out as a Greek city state founded by Cassander of Macedon, then became Roman, then a free state.  In 900 AD, it started getting sacked, by the likes of the Arabs, Goths, Normans, and finally the Turks.  Known as Salonika, Thessaloniki was part of the Ottoman Empire until it fell back into Greek hands during the First Balkan War.  The city shifted hands several times during the first half of the 20th century but is now firmly Greek.  After a great fire in 1917 and then an earthquake in 1978, a lot of the original city was destroyed.

Still, we managed to find an old hamam under renovation, where no one stopped us as we wandered through and took pictures.  This is pretty neat, since hamams in operation usually ban cameras for privacy reasons.

the marble slab where you get rubbed and massaged

Later we found the old Agora.  What’s left is mostly from Roman times:

the old Agora backs right to the modern city, like Alexandria in Egypt

glass found in the agora 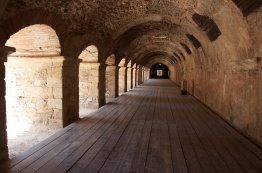 the walkway of the necropolis

some of the tiles from the merchant shops – pretty snazzy!

some of the world’s first coins

My favorite part of the day was visiting Ataturk’s childhood home.  It’s attached to the Turkish Consulate and surrounded by police, so we walked around the perimeter a couple of times before somebody told us to ring the bell – so obvious!  Unfortunately the house is under renovation, but I got to practice Turkish with all the guards and a guy from the consulate who gave us a quick history of the place then took our picture.  Even in Greece, the Turks are super-friendly! 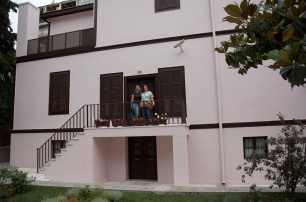 And some other sites around the city:

do you think pigeons rested here since 300 AD-ish?

the rotunda, which became a church and a mosque