Marmaris for eating, drinking, and a beach break (Reports from the Summer Road Trip)

the coast at twilight

As we headed west on Turkey’s Mediterranean coast, Mom and I stopped in Marmaris for a few days.  It’s a good ferry-port for visiting Rhodes and another nice beach town in Turkey.   On the drive down the mountain from the highway, we could smell both the pine forests and the salty sea breeze, interrupted by the occasional roadside “milky corn” stands.

Since we arrived late in the afternoon, we had two items on our agenda: beach and dinner.  As a natural multi-tasker, I thought it was best to find a beach while we had the sun, and then figure out dinner from there.  The coast is lined with resorts and it was difficult to find a pathway to the water, or even a public beach sign.  Each resort has its own section of beach stakes its claim with rows of umbrellas and chaise lounges.  Sometimes, you can just sit there and enjoy, and other times somebody comes up and demands money for the privilege of sitting in their chairs.  Since I never know which kind of place it is, I’ve taken to sitting wherever looks good and having some ready-cash on hand.  We were definitely on a resort’s property since everybody around us was speaking Russian and wearing wristbands, but luckily, at this particular beach, nobody pestered us for fees.  Eventually, two spots on the pier opened up, and Mom and I upgraded our lounging and stayed until sunset.

For dinner, we ventured into the old town of Marmaris for a restaurant I had found on tripadvisor.  It’s called the Drunken Crab, which I know doesn’t sound very Turkish but is definitely worth a try.  It’s owned by a Turkish/British couple, Mustafa and Kim, who cook all the food and run the place.  You choose your menu by picking meze and seafood items from the refrigerator, and then it’s all cooked to your liking and served with hot, fresh bread.  For dessert, the restaurant has a tradition of bringing an unbelievably delicious hot brownie surrounded by fresh seasonal fruit.  It was some of the best fruit I’ve tasted in my life!  Of course, the restaurant is on Bar Street, an infamous place in Marmaris for British stag/hen parties and drinking tours.  It’s rarely dull in the evenings!

Our hotel was down the street from the Wednesday market, and since it was the right day, we checked it out.  Mom made friends with lots of the salesmen and got to see what kind of stuff is on offer at a regular market (it’s a bit different from the bazaars in Istanbul).  She also got to try simit, which is a Turkish bagel-type bread covered in toasted sesame seeds.  Of course, simit goes best with kaymak (kind of like clotted cream), and sure enough, when we reached the dairymen, a guy slathered a bunch of it on her bread so that she could eat it properly.  If you’re ever in Turkey and hungry with no money, visit a market.  You can definitely fill up on all the samples – they’re impossible to refuse.

one of Mom’s admirers

patlacan, my favorite food in Turkey!

Since the whole point of staying in Marmaris was to take a day trip to Rhodes, we headed over to the ferry port to get our tickets.  It’s a good thing we did this the day before, as throughout the summer we encountered fully-booked ferries all over the place.  The ferry port is at the edge of Marmaris and next to the National Park.  We drove towards the park to find a less commercial, resort-y beach vibe.  Stretches of Turkey’s coast are completely undeveloped, and occasionally the edge of the road hits the ocean from erosion of the shoreline.  After a few minutes of this, we passed a lot of drabby parking lots and a few sad, crumbling restaurants.  Finally we parked at a little rundown place on a cove and checked it out.  These beach chairs were free, and they bring you drinks.  We also ate at their cafe, which had tables right on the beach, overlooking Marmaris proper across the bay.  I wish I could remember its name, but I don’t think it even had a sign.  Basically, drive past the ferry port and stop when you see a pebble beach with a 10 m rock behind it.  If you pass the yacht club, you’ve gone too far. 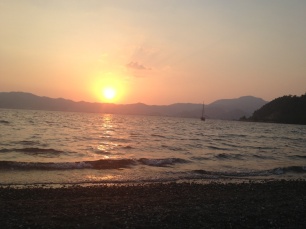 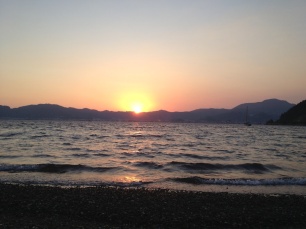 This place became our Marmaris hang-out.  We stayed until sunset, and then a little later, because it was THE SITE for sunset photo shoots.  At first one girl showed up with a photographer and a costume bag, but as the sun dipped, more photographers, with couples or families, arrived. It was great people-watching.  Mom and I even returned the next evening after our trip to Rhodes for a sunset cocktail, and we weren’t disappointed with the view – sunset and even a Marilyn Monroe lookalike! 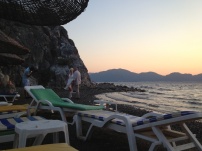 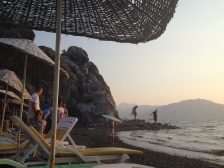 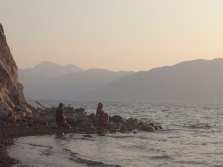