A Few Days in Greece (More Reports from My Summer Adventures)

The strongest memory of my first trip to Athens, in 1996, was my godmother telling my mom that she was taking me to live sex shows all over the city.  After my mom’s shock and our laughter, we told her about all the frisky cats  doing their business on the streets.  This year, I’m sad to say that we didn’t see a single free sex show on the streets of Athens.  And I almost forgot the rest of what I had seen in Athens eighteen years ago, which makes me think that travel has a half-life, somewhere between 15-20  years.  So, if you’re not going back somewhere because you’ve already been there, maybe enough will have changed in two decades to change your mind.

like Turkey, ruins are everywhere. These are in a churchyard 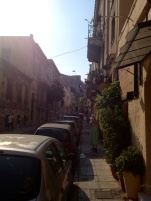 This time Athens was less lively, but that may also be due to the financial crisis.  Despite the crisis, Mom and I still found restaurants full of people enjoying themselves.   The only obvious sign of economic problems, at least to a tourist, were lots of empty storefronts.  We stayed in an airbnb apartment in a residential neighborhood, and walked to tourist areas, where there were shops and hawkers aplenty.

view from the museum cafe

We were really impressed with the the Acropolis Museum.  It wasn’t there in ’96, and it’s an amazing improvement that definitely enhances your visit.  The opening hall has transparent floors, so you can see some of the ruins below as you view the prize collections of Athens.  The top floor has the frieze and other carved adornments that remain from the Acropolis – it’s incredible to see them up close and get the background for their stories.  I also have to mention the cafe – we had an amazing meal there while admiring the view of the Acropolis – I almost like looking at it from afar better than when we saw it up close!

we walked over these ruins on the way into the Acropolis Museum. The building has many glass floors so you can check out what lies beneath.

Later we hiked up the hill, which is a lovely walk through grassy lots, random piles of old rocks, as yet unassembled, and beautiful trees and shrubs.  The landscape makes the slightly uphill walk really enjoyable.

Here are some of the random rocks that we saw: 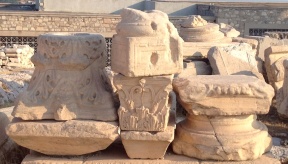 On the way back down the Acropolis Hill, we saw the Agora and a great view of the Temple of Zeus, which was already closed when we tried to see it earlier in the afternoon. 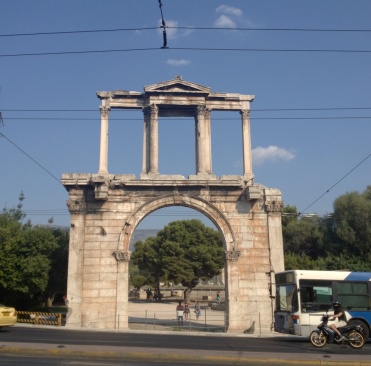 Hadrian’s Gate, outside of Zeus’s temple 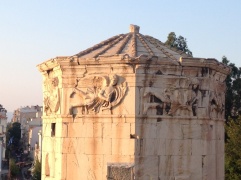 beautiful stonework on an unidentified tower

an orthodox church neat the Agora

The Temple of Zeus

The Temple of Zeus from the hill 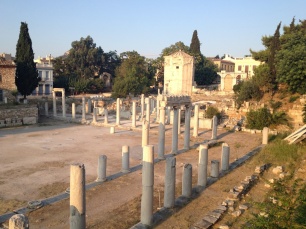 I also visited Dephi back in ’96, but don’t remember much more than the theater.  The Delphi Museum was remodeled since then and is also worth the visit – Greece definitely has Turkey beat in terms of museum design and presentation of information. It’s well laid out and does a great job explaining the phases of worship at Delphi and its various treasuries.  Towns throughout Greece kept some vaults at Delphi during Hellenic times, some of which are still sort of standing today.

Here are some the offers found from treasuries around the site:

Antinoos – I instantly fell in love with this guy!

these closely resemble Cebelis in Turkey

a silver and gold bull, lifesize, from the 6th century B.C. 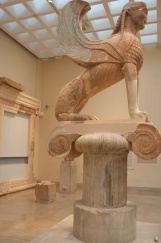 the twins, Omphalos and Oenomaus 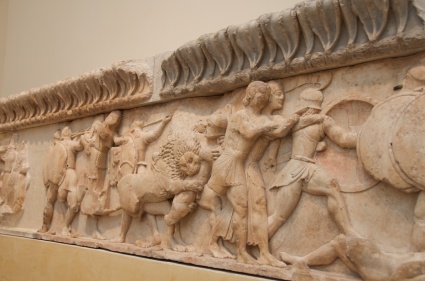 the frieze from a fallen treasury

When you visit, you really appreciate the site of Delphi, and how well the ancient Greeks picked a holy spot.  I wish I could describe the combination of the breeze, the sunshine, the pine scent and the hum of cicadas that we experienced while climbing through the site – it was heavenly! 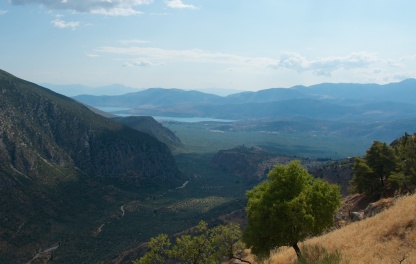 the view to the sea from Mt. Parnassus

this is the stadium, and the picture doesn’t do it justice. It’s huge, and the site of the Pythian Games, a precursor to the Olympics

the floor plan of Temple of Apollo 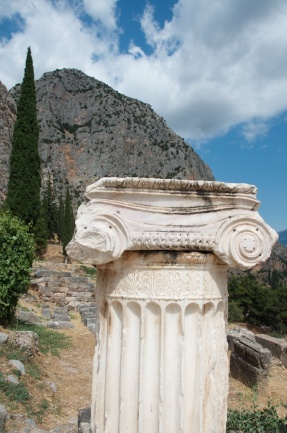 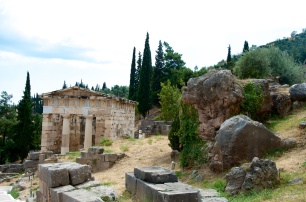 the oracles sat in these stalls 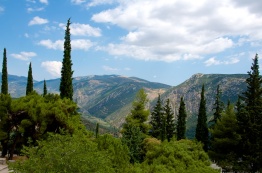 The rest of Greece was a bit of a blur.  Mom and I had plans to stop at Corinthia on our way to catch the ferry to Italy, but decided against it as we both like sleeping in the morning, and I was a bit stressed about getting through the ferry boarding administration process.  It’s a little more difficult to board a ferry with a car  Usually you have to go to one office to pick up your tickets, then another to get your boarding pass.  Sometimes they want to inspect your vehicle before you drive it on.  In Patra, once we found an office with friendly workers, it wasn’t that challenging of a process.  We picked up our tickets, then our boarding passes, and then finally found the right port (there’s a new one, further down the road), where we would board, eventually.  Once the stress was assuaged, we found a nice cafe in a pedestrian zone in Patra to enjoy a little more Greek-style frappes and food before we hopped to Italy.