Çatalhöyük and Boncuklu: some of the oldest towns in the world (Archaeology Sites around Konya)

I think one of the most fascinating things about living in Turkey is finally understanding the complex mix of civilizations that existed on this land over the millennia.  Before I moved here, I only understood Turkey in the modern sense, and I knew it was formerly home to the Ottoman Empire.  Then, once I started touring around the country, its past as part of Rome (and Byzantine) and, before that Greece, finally dawned on me.  Now I’m to the point where I have a rough idea of who ruled each corner of Anatolia (the Asian part of current Turkey) over the centuries.  Still, I frequently visit a new place and learn about another civilization that came and went over a short span of a few centuries.

In November, on a trip with Friends of American Research in Turkey (FARIT) to the archaeological sites around Konya, once again my mind was blown.  The highlight of our trip was a visit to Çatalhöyük, a settlement that is possibly the oldest town in the world.  The general consensus is that it is the largest and best preserved neolithic site found so far.  As a refresher, because I tend to forget these things too, neolithic means the New Stone Age, or the last segment of the Stone Age, and dates roughly from 10,000 B.C. to about 4500 B.C.  Çatalhöyük, the site I visited, was around from about 7500 to 5700 B.C.  In general, the neolithic period started at the end of the Ice Ages, as people started moving further north following animal migration.  Eventually, with the development of cereal, farming and animal domestication began.

around Çatalhöyük – the river used to run between the two mounds

The site contains a couple of mounds (höyük) of several domestic buildings.  Interestingly, the homes were entered from above, so that the floor of the town structure was actually the roofs of the homes.  The archaeologists think this design was for fire prevention.  If a fire broke out, the roof could be collapsed to smother it.  In addition, this could prevent the spread of fire to nearby houses.  The pictures below are a modern mockup of the house style. Remember, the living spaces were climbed down into. 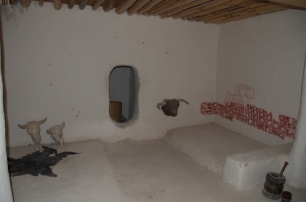 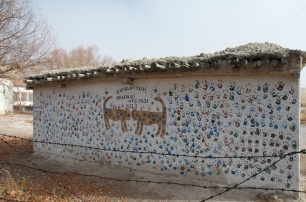 Most interesting about Çatalhöyük was the burial of its dead, with its reasoning still unclear to archaeologists.  Skeletons were found under several homes during the excavation.  Some skeletons were complete; others lacked heads, and other complete skeletons were holding genetically unrelated skulls.  Other skulls were found buried separately.  What’s with the skull love?  They also had several murals painted on their walls, and sometimes more than 100 layers of paint, with countless unfound murals underneath.  Most of the paintings were red animals of some kind.  Again, the meaning and or significance is still unknown. 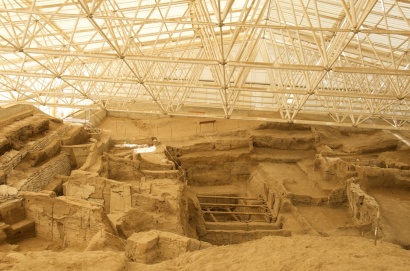 inside the second mound 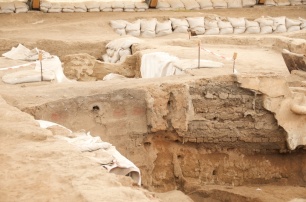 Our next stop was Boncuklu, which means beaded, named after the old beads found here dating back to 8500 B.C.  Unfortunately the site is at the beginning of excavation, and when we visited in November it was a covered mound, waiting for archaeologists and summer.  I remembered to write this post when I saw some beads and a placard mentioning these sites at the Louvre a few weeks ago!

Our next stop was some Hittite ruins.  Hittites are considered the first civilization in Anatolia.  If you’ve never heard of them, don’t worry; I  hadn’t either until I moved to Turkey.  First we walked through a village to see a carved statue that’s been sitting on a hillside forever!  No one knows what the statue was intended for, or exactly why it was made, or why it’s currently on this hill.  Possibly, it was from a quarry nearby, and then carved here.  The size is immense, and larger than those found at the Hittite capital in Hattusha.

I really enjoyed the walk through the village, and the scenes of daily life in the area.  Across the hill from the stone above, there’s an ancient Lycian tomb decorated with a horse.  Seriously, these ruins are everywhere in Turkey!!!

Our last stop was the ruins of Eflatunpinar, another Hittite ruin.  It’s a temple built on a spring during the Hittite era, although its exact timing is unknown.  On the spring, the figures represented are gods and goddesses of mountains, the skies, and the underworld.

detail on one of the gods at the bottom

three bulls were probably intended as a fountain as well

Finally, we visited the Konya Archaeological Museum.  Most of its items are early Roman ruins.  For me, the most interesting was this sarcophagus, on which our archaeologist said was the earliest known use of the Christian cross on a tomb, dating from the 2nd century.

Here’s a gallery of some other tombs found in the area: 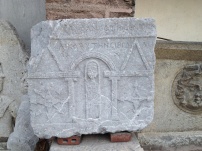 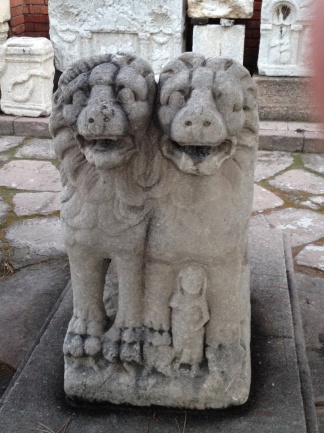 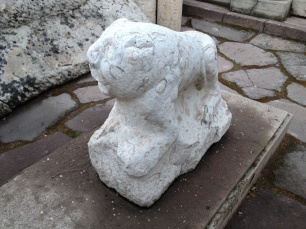