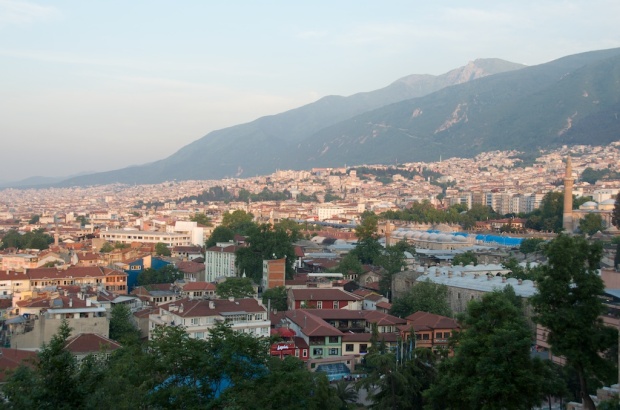 Bursa is located at the foot of Uludağ, or Great Mountain.  I was impressed by how green it is!  Along with giant trees, the city has plants and flowers all over the place.  It’s great to walk around or just hang out. They even have a register of the big trees, which I found pretty impressive for a Turkish city.  Of course, now that I’m back in Ankara, I have to admit that we actually have a lot of green stuff here too.  I tend to forget that it’s actually a pretty decent place to live.

My favorite part of the city was the Koza Han, which is currently the silk bazaar.  It’s a beautifully constructed building from the 1490s with arches, courtyards and gardens.  Now you can buy all kinds of things, or just stop for a tea and enjoy the surroundings.  I didn’t have enough time to find my perfect silk souvenir, so I’ll definitely be back!

my first sight in Bursa – incredible! 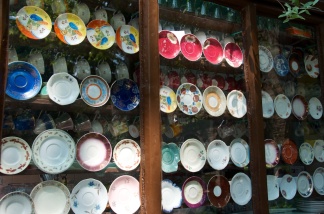 teaware diplayed at a tea shop

silk at every shop

the roof of Koza Han 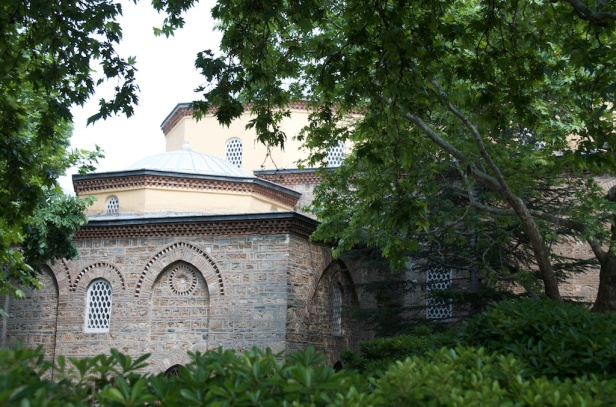 Right next to the Koza Han is the Grand Mosque, or Ulu Cami, which was built in the late 1300s.  It was ordered by Sultan Beyazid I and built mostly in the Selcuk style.  After the sultan won the battle of Nicopolis, he vowed to build 20 mosques.  The treasury didn’t quite support that, so instead he built a huge mosque with 20 domes and 2 minarets.  It has a lot of neat interior features, including a fountain right in the center, a highly decorated mihrab, and a minbar with a carved wooden display of the planetary system as it was known in the 14th century. 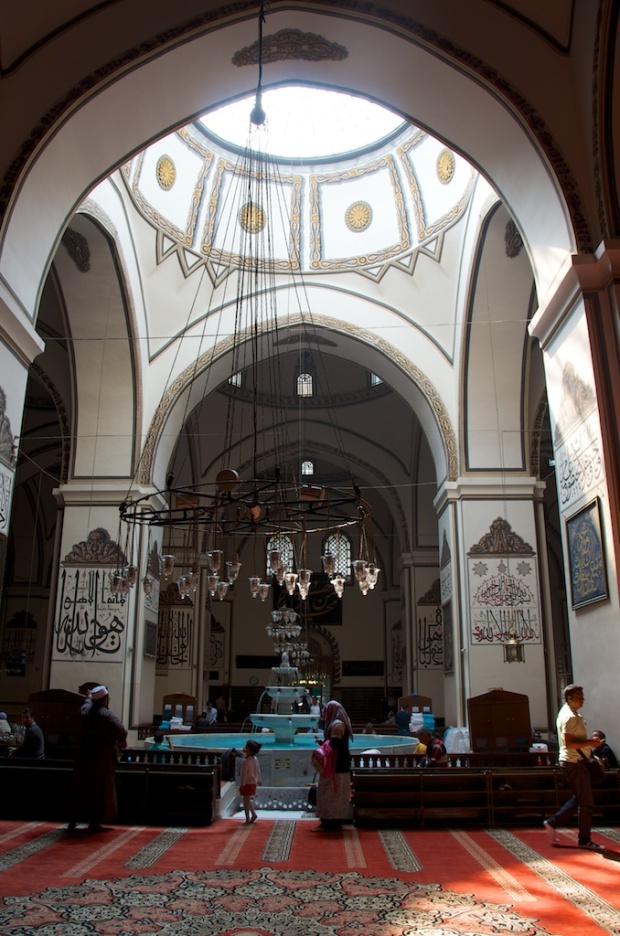 the fountain at the center of Ulu Cami in Bursa

The two minarets are shown below.  It’s very difficult to get a picture of the outside of the mosque since it’s bordered by the Koza Han and other shops on all sides!  To see the domes, look at the center of the right third of the first picture in this post.  You’ll see the Koza Han, and behind it the 20 domes of the Ulu Cami.

And some of the interior features: 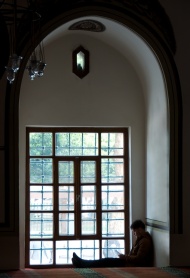 I love the alcoves

the minbar. If you can see behind the plexiglass, check out the solar system!

lots of activity near the fountain. Mosques serve like community centers – you usually see all kinds of things going on in them. 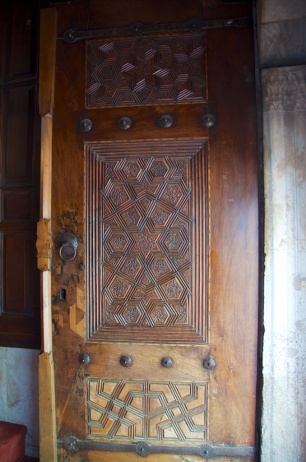 even the door is amazing!

the mihrab, which points to the direction of Mecca

the mihrab/minbar decorations. Calligraphy is a highly valued Islamic art.

As one of the Ottoman’s original capitals, Bursa has a lot of tombs from the families patriarchs.  Here’s the Green Tomb, where Celebi SultanMehmed and some of his relatives were interred.  All of its walls are covered in tiles, making it truly unique. 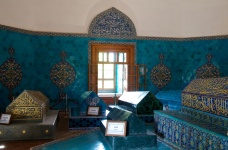 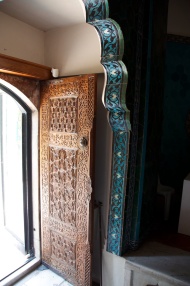 other lesser notables got buried outside. 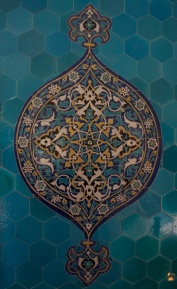 Next to the Green Tomb is, no surprise, the Green Mosque.  This is a small, peaceful mosque and was definitely my favorite.  Along with the main hall, there area several small rooms on either side with nice niches that seem perfect for quiet reflection.  I even checked one out myself!

I love the tile trim around the waters

your view upon entry 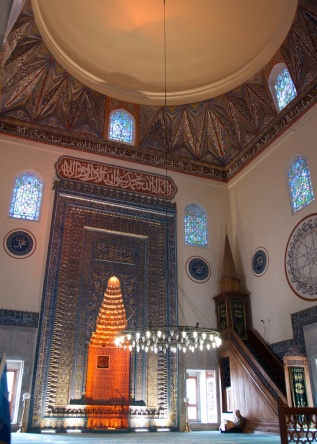 the mihrab and minbar 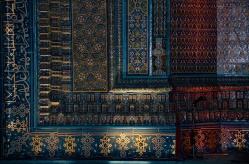 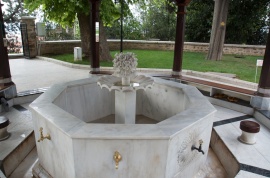 fountain outside for ablution 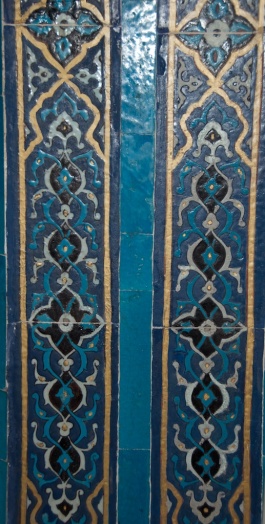 the stonework of the fountain

Next was the tomb of Orhan Gazi, the sultan who conquered Bursa.  It’s also incredibly ornate, and built on the grounds of a Byzantine Monastery that overlooks the entire city. 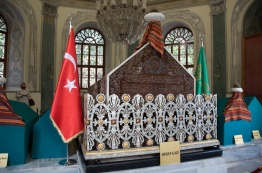 I mentioned how much I loved walking around Bursa.  Here are some of the random scenes from the city: 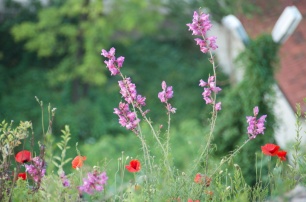 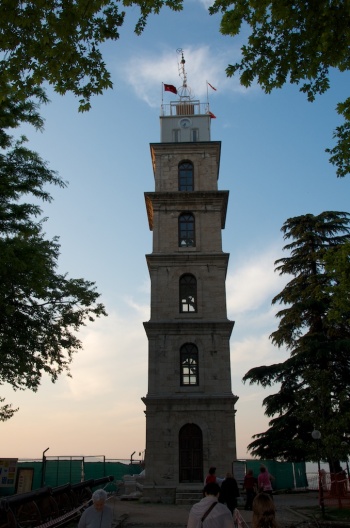 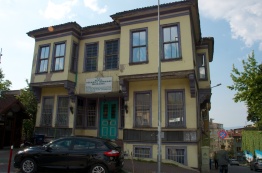