As we left Erzurum, we planned to drive through Kaçkar National Park, from its southwest to the northeast side. We found a neat eco-hotel on the other side and had made a reservation, which in our minds locked us on this path. According to google maps, the trip should have taken five hours or so. We would admire the view, drink spring water, and take lots of great pictures, all while covering distance in good time on our road trip.

the lake is long and windy

The road north from Erzurum quickly changed from a highway to a windy two-lane mountain road, but as we were in Eastern Turkey and had grown quite used to its variety of roads, we barely noticed the difference. We had the beautiful alpine-like Tortum Lake on our right side for a long spot, and then drove along its feeder river for most of the day.

We stopped to check out the Tortum Falls along the way. 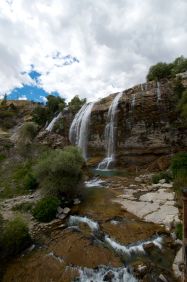 We knew we had to drive northeast, and since we were headed in a basically northerly direction, we generally just chose to turn left at every fork in the road. Occasionally we stopped while a road was being repaved, or a bulldozer very methodically moved dirt around on a pass. At this point the road was not so much paved as flattened dirt, with lots of rocks and potholes. In a word, it was punishing.

To get through without busting the car up, we had to watch the road very carefully and swerve to avoid boulders and puddles while keeping the car from falling off of the road’s edge. A few oncoming cars provided some breaks as inevitably one of us had to back up to let the other car pass. We made something like 15-20 kilometers per hour for a few hours. Each of us drove sections while the other admired the view and tried to snap pictures. Occasionally we caught glimpses of the snow covered peaks as we went around a bend. 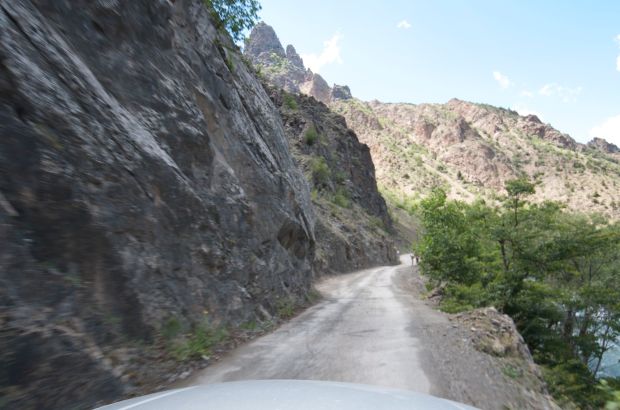 At some point the TomTom, our navigation system, told us to turn around. We had printed the route on google maps, and I had the directions spooled up on my iPhone, so we felt certain that there was a way through the mountains to the other side. As we passed villages, we smiled and waved at the folks milling around, as if to say, “We’re headed into the mountains on a great adventure.”

We had lunch along the creek, across the road near an old concrete bridge.  The river was so loud that it was difficult to hear much of anything, and we got so lost in the scenery that we weren’t sure if any cars had passed while we were lounging.

Finally, we reached then entrance to the national park and felt that we had basically made it. Of course the road in the national park would go all the way through to the other side. We stopped to check out the map post at the entrance, but since it just detailed various hikes that you could take, we found it thoroughly confusing. We also talked to a beekeeper at the entrance, who said it would take at least 5 hours to get to Camlihemşin, our destination. He advised that we turn around and take the northerly coastal route.  I checked my google maps on my phone again, but the route and directions had disappeared, and I no longer had cellular service.  Since we were already on this journey, we decided to just keep going. 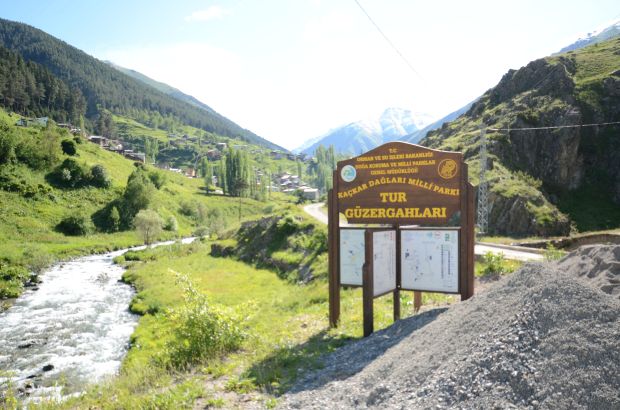 Kaçkar National Park is difficult to get to, and inside it we only saw signs of local life: villages comprised of a dozen or so clustered houses and an occasional store. However, it is absolutely stunning, which is probably directly connected to the few visitors it receives. Imagine beautiful green pastures and valleys with snowy peaks and a rapidly moving river right down the middle. If you’re brave enough for the road, or smart and just take a bus/minibus combination to get there, it’s definitely worth a visit.

Of course, our visit involved peering out at the vistas combined with a constant nagging concern that we weren’t going to get “there.” As we ascended into the mountains, the road narrowed and the intense beauty of the place increased. At each village we passed, we noticed heads slowly turning to watch us pass, but again, we just smiled and waved. “Nothing to see here, folks, just a couple of girls driving up into the mountains.”

At the highest village, we passed a few houses, pensions, and then a small village-style cul-de-sac with houses divided by tiny narrow alleys ended the road. Although we looked up each one, there was no way a car could fit through any of them, not even a Mini Cooper. We had reached the end of the road, with no option but to turn back.  We were a bit let down at this point, and didn’t even bother to take pictures.

On the way back down the same terrible road we passed the same sites, the same bulldozers pushing dirt around on the pass.   We were conflicted the feelings of the defeat of not making it, the thrill of an adventure, even if our stubborness and stupidity caused it, and the joy of being in the midst of such beauty. Sure, we weren’t going to get to our destination for another 5 or 6 hours, and we had to drive all the way up to the coast and then all the way back into the mountains, but no matter. We went to the Kaçkars and didn’t get stuck or break the car. Yay!