the view of the mountains in Altindere National Park

After about a week of relative isolation in the mountains, Emily and I were not prepared for the tourist invasion at the Sumela Monastery.  As we drove into the park, located south of Trabzon, we felt accosted by the crowds.  Bodies occupied every space available on the roads, and the quality of the road in the Black Sea Region had not altered in the park.  On the way up the mountain, we stopped or backed up many times at curves in order up to allow another car to pass on the narrow windy road.  Eventually a park ranger ordered us to turn off the road and park up on a gravel hill.  We would be hiking the next kilometer into the monastery.  Even though the path was crowded and we had to pass through some strong body odor clouds along the way, I enjoyed the walk into the monastery more than the monastery itself.  I think after two years of living in Turkey, I may be at the end of my interest in ruins and religious sites.  I keep visiting, through, because these sites always seem to be located in beautiful places, and now I go for the scenery.

Even though I’ve got the old stuff fatigue, I’ll give a quick history of the Sumela Monastery, which is known as one of the several Churches of the Virgin Mary (Meryema) in Turkey.  This one was founded in 386 AD by the Romans, and restored several times over the centuries by them, including a huge restoration and enlargement by the Emperor Justinian in the sixth century.  When the Ottomans captured the Trabzon region, the sultan protected the monastery.  The monastery was funded by the Greek Orthodox church.  It was taken by the Russians with their capture of Trabzon in the early 1900s and then abandoned in 1923 after the Greek/Turkish population exchange.  Until it was abandoned, it served as a holy place for Orthodox priests and a pilgramage site for the faithful.  It’s current state is a tourist attraction.  Here are a few pictures:

the view from a monk’s walkway

the wall of a chapel 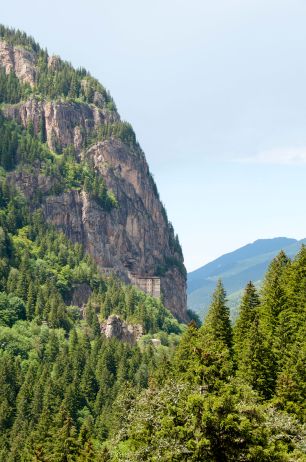 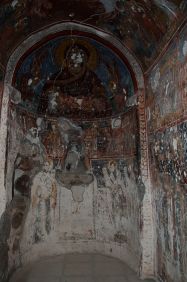 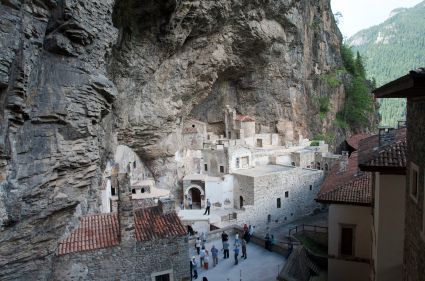 After the monastery we drove back north for a night’s stay in Trabzon.  Along the way, we stopped at many local roadside shops and helped support the economy.  Emily, an amateur beekeeper, was impressed with all of the hives we had seen in the mountains, so we stopped and bought some honey.  Along with the typical wildflower variety, we got chestnut honey, a much darker and richer variety.  The guys told us to use it as medicine, a cure for whatever the ailment.  We also got a pasa table (yep, like the ones in the harem) and some Black Sea style ponchos.

In Trabzon we couldn’t get to our hotel.  The Prime Minister was speaking in the central square, and most of the roads near the center were closed.  We spent about an hour trying to circumvent the blockade, then finally gave up and found a parking lot in a shopping area.  After sampling a local bakery (Trabzon bakers are famous all over Turkey), we found a bazaar and picked up some copper wares.  I wanted to buy everything in the shop but held myself to a Turkish coffee pot and a fish pan.  That night, we walked to the water for a pontoon restaurant recommended by Lonely Planet, but were disappointed to find that they no longer had meze (just green salad) and did not serve alcohol.  So, we walked back into the city and found a pub, where we got our much deserved beer on a hot summer night.  It was definitely the right choice, as we also got a highly entertaining waiter who kept bringing us extas, including a small sample size of beer with our check.  Score!

Before we left for Sinop, we spent the morning buying silver.  Trabzon’s signature is a light-colored woven silver thread.  You can get it in huge flashy pieces, rings, bracelets, or cute little silver knots.  We stocked up on gifts for friends and a few for ourselves, of course.  Besides the shopping, we didn’t see much else of Trabzon.  However, the friendliness and excitement of the copper sellers, the silversmiths, and our wait still left us with a good feeling about the city.

One of our easiest drives of the road trip was from Trabzon to Sinop.  We were mostly along the Black Sea Highway, which is a four lane fast highway with no cops enforcing speed limits.  We didn’t have any problems until we faced our usual GPS location/actual location conflict when we were actually in Sinop and trying to find our hotel.  Thankfully we could rely on old-fashioned technology of parking and looking down the coast to see that our hotel was most likely on the other side of the peninsula.  When we finally found the hotel, we were rewarded with a great sunset from the comfort of our room:

I wish I had taken pictures of the amazing linen shop we visited in Sinop.  It’s in an old medresah (religious school) that’s been converted into a local crafts bazaar.  The owner-weaver sources linen thread (flax) from all over the Black Sea Region, and then weaves home items, clothes, and bags, and jewelry right in her shop.  I think we were both too focused on figuring out what to buy instead of tourist mode.  After shopping we made our way to the water and Emily got an introduction to a typical Turkish fish dinner.  Instead of sitting down with a menu and waiter service, you’re kind of accosted as soon as you enter.  The host shows you the meze, which you choose as you look into the refrigerated case.  Then you discuss the fish options, and then the drinks.  After all of this verbal picking and choosing is done, you finally get to sit down and relax.  I’m so used to this procedure that I didn’t even realize that it was a different system until Emily pointed it out.  I guess it is kind of weird to make a bunch of decisions in rapid-fire before you even get the comfort of a seat.

Since we were by the sea on a sunny morning, we took advantage of the hotel’s seawater pool to soak up some sun before we hit the road again.  It was also nice to look back east along the coast, and see how far we had come. 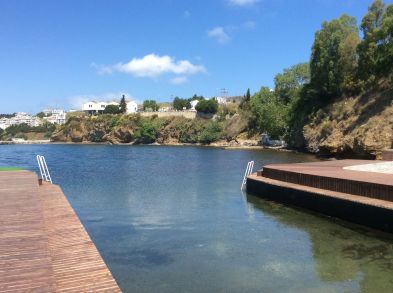